Ranny Green, pet columnist and feature writer for The Seattle Times, contributed a feature story highlighting Ginger’s Pet Rescue for the Seattle Kennel Club. The feature – titled “Rescue is Just the Beginning,” starts, “When it comes to saving dogs’ lives, animal rescue has no boundaries for Ginger Luke of Seattle.”

The article provides an inside look at Ginger’s rescue operations, and can be read in full here.  It is reprinted in part below.

When it comes to saving dogs’ lives, animal rescue has no boundaries for Ginger Luke of Seattle and Melissa Lingk of Tacoma.

Both receive their share of angry e-mails for bringing in animals from far outside the Puget Sound area, fostering them and then finding “forever homes” for them.

Luke, founder of nonprofit Ginger’s Pet Rescue, oversees a tight network of 160 foster homes (which includes a core group of 40) but is always seeking more. “Many of our rescues are small dogs,” she emphasizes, “which are not in big numbers in local shelters. There is not a day that goes by when I don’t get a call or an e-mail from a California shelter asking if I can take more dogs which are destined to be euthanized within a day or two.”

Ginger’s Pet Rescue has found homes for more than 1,800 dogs since January 2006 but the demand is seemingly growing. Many arrive with several health issues and are mid-age and older. In other words, not prime adoption candidates.

“They don’t choose to be ignored, left outside alone all day, never groomed and fed poor quality food,” she adds. “Sure, we end up cleaning up someone else’s neglect but how can you say no to these innocent creatures?” 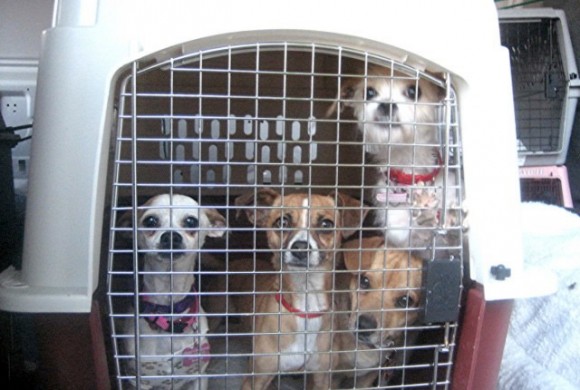 Last month, Ginger’s Pet Rescue was focused on finding homes for several dozen dogs rescued from Southern California wildfires. These were animals that were left behind or simply ran during the wildfires, ending up in shelters or on the streets of a nearby community. Most were not microchipped nor had ID tags.

“Each came to us with a story,” said Luke, “which we will never know.  They were traumatized and in poor condition with eye, skin and breathing problems.  We’ve had some enormous vet bills trying to restore their health and make them adoptable.”

But the chore facing Luke and her corps of volunteers isn’t simply repairing these animals’ physical maladies. Their psyche needs plenty of work, too. Imagine being displaced from the comfort of your home by a fire, then being on the move for days, eventually being moved to an overflowing animal shelter, then being trucked north to an entirely foreign environment. That’s enough to totally rattle anyone’s psychological barometer.

The key to a success, Luke says, is a committed army of foster-care volunteers. “These are truly compassionate people who provide food, care and shelter in their homes until a permanent home can be found. It’s not a job for everyone, but it’s a very fulfilling one for many.”

The crated animals are brought north in a truck, usually with 30-plus per trip. They are met in this area by volunteers, where all of their paperwork is examined closely and medical needs are determined.  Via web-site notices (www.gingerspetrescue.org), she attempts to have enough foster-home volunteers in place to accommodate every incoming animal.

“I feel like a ‘Dear Abby’ for dogs some days,” she admits. In fact, while interviewing her at the Rickshaw Restaurant, one teary-eyed woman came in with a printout sheet containing a photo of her pit-bull mix that was in need of an immediate home. The dog, however, had behavioral issues with other dogs, which stopped Luke right there.

Ginger’s Pet Rescue has no paid staff, but one of her volunteers does animal-behavioral analysis, and Luke assured the pet owner she would discuss the matter with her.  “This happens every day,” she said.

Dog rescue isn’t about me, she emphasizes, it’s about the needy animals. “We don’t have time politics and bickering. We need to direct all of our energy into helping these dogs.”

Does she ever worry about burnout among the volunteers? “You bet, ever day,” she replies.

“The bottom line is every dog deserves a second chance.  They didn’t choose to be put in the situations they’re in.  My commitment to them is finding a loving home for each.”

Last month, Luke found an incredible benefactor who is donating the use of a lighted and heated warehouse in South Seattle for use as a staging area for incoming dog transports. This will allow the Ginger’s Pet Rescue team to do all necessary documentation and clean all animals before sending them to foster homes.

The same individual purchased and insured a rescue van and equipped it with 40 crates for the organization.  “The dogs hit the jackpot, and we are so indebted to him,” added Luke.